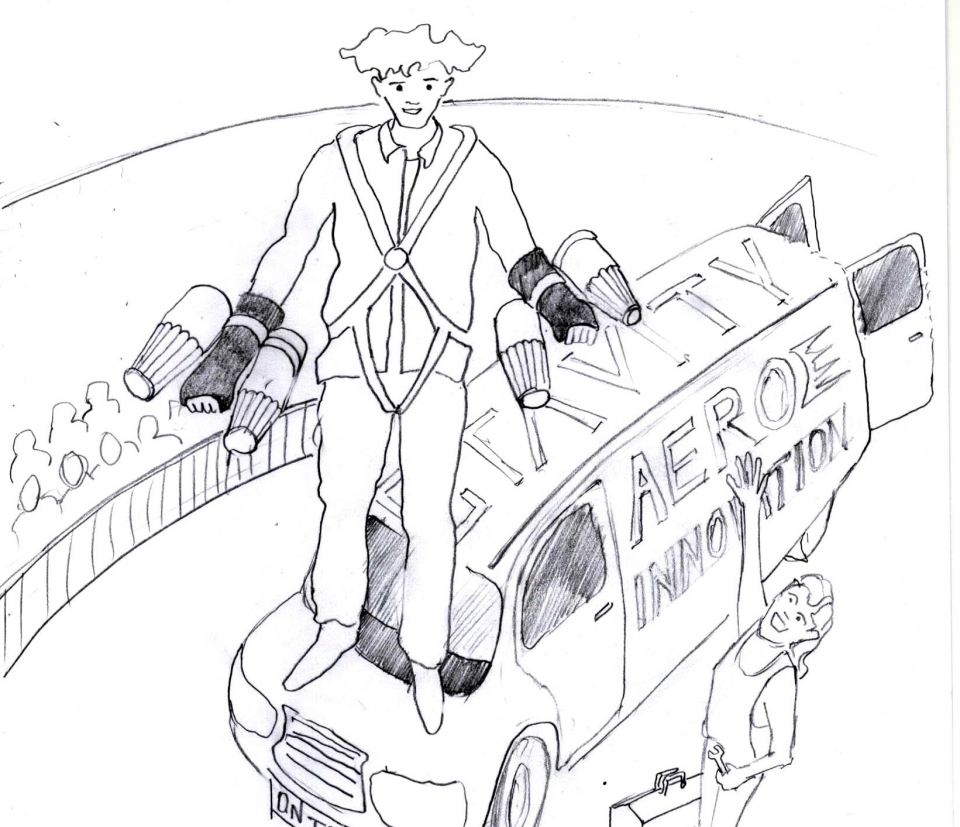 Although he thinks he is, Alex Wilson is not a normal guy. I don’t mean he’s a weirdo: he doesn’t collect spark plugs or eat solely wasabi peas (at least as far as I know). I really mean that no longer is he Joe Bloggs who eats a roast on Sundays and watches Netflix in the evening. Because Alex Wilson is a Rocket Man.

When Elton sung about his Rocket Man, he was picturing a man inside a hydrogen fuelled vessel hurtling toward the stratosphere. Rocket Man Alex is attached to six jet engines and flies at around 8 feet off the ground. In this scenario, height really doesn’t matter, because what Alex and co-creative Richard Browning have achieved is remarkable.

Let me skin the red herring I left flapping around the previous paragraphs. Although ‘Rocket Man’ is an unrivalled job title, that many of us only come close to in dreams, Alex’s self-proclaimed occupation is ‘Inventor’s Assistant’. The inventor he assists is Richard, the founder and chief test pilot of Gravity. He conceived the idea for the jet suit and tested the first forearm mounted jet on a high-hedged countryside lane back in 2016. He then added a jet to his other forearm and started jumping around farmyards, a tentative doe in spring. Another was added to each arm, Richard appearing like a boxer psyching himself up for the title bout. But in order to take on gravity in the ring, Richard needed a cutman in the ring corner. And leaning on the ropes, Alex spurred Richard to a knock-out. As Batman needs Robin, Richard needs Alex as co-collaborator and innovator.

So what did an Inventor’s Assistant impart to the students of BTEA? Swimming the digital ocean shallows and deep, Alex met another guru and mentor: YouTube. YouTube taught him the ways of the Arduino circuit board, and hence the Inventor’s Assistant learnt to reprogramme the jet suit for more dynamic flying. Alex believes that his hobbies, activities, and jobs outside of education are of more relevance to his job than what he learnt in school and at university. Yet, he emphasized, education is still vital because without it he would not have had the opportunity to become Rocket Man.